A book that changed my life

I've been tagged by Elizabeth.
The theme is "A book that changed my life".
Thing is, I've been racking my brains and I'm not sure if I can come up with the definitive Life Changing Book.
I've probably read quite a few that were a part of a life changing process, but none that quite deserve the full accolade.

If I were to pick one however, the most obvious, and the most recent candidate, would be The Mass Of The Early Christians by Mike Aquilina. 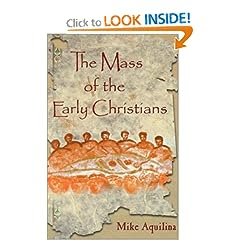 It was a book I came across entirely by accident.

I've blogged before about how I used to assume that what happened at Mass on a Sunday was very different from the practice of those first Christians. I imagined that it was inevitably the result of years of religious practice, the accretions of changing customs down through the centuries.
I mean, the Actual Factual Jesus wouldn't have gone in for all that 'Sit. Stand. Kneel' routine would he?
Obviously not right?
Obviously.

So, as a happily free range Christian I became really interested in the Jewishness of Christianity and wanted to learn more.
As a consequence of this, I held a couple of Seder meals.
During the preparations for the second one ( only in 2008) I was thinking alot about how very 'liturgical' the Jewish year was. It struck me as a very helpful thing that they had a structure to hang the year on in which they called to mind certain key events in their history as the people of God.
Turning this over in my mind got me thinking about church. What exactly did they do, those first Jewish Christians when they got together to 'do church'?
The more I pondered it, and the more I observed the Jewish traditions, the more inconcievable it seemed to me that the first Christians simply gathered together for a rousing rendition of the first century equivalent of Shine Jesus Shine and then listened to an 'excellent talk'.

These thoughts were disturbing me, not least because I liked the worship and the excellent talk and had found the Mass experience pretty moribund and so so.

So. Feeling a bit panicked by these unwelcome, rather 'catholic' thoughts, I approached a Learned Friend. She was an ex Catholic herself, who has been attending a Pentecostal church for some years now.
At the time, what I really wanted was for some clever person to give me the answer that would lay to rest this nagging sense that there was something missing.

My Pentecostal friend, who in the past had been someone who was very game when it came to tossing ideas around, chewing the fat and being generally philosophically inclined, seemed like the ideal person to turn to for some answers.
In short, it was a disaster. She felt picked on and put on the spot by my questions. She said she wasn't interested in the questions and she didn't care about the answers. My seeking answers was evidence of my 'not getting it'.( 'It' being that the things of God could not be discerned intellectually, but rather were known spiritually)
She had a 'heart' relationship with God, and I, on the other hand, had a 'head' relationship.
Ouch.
If I'm honest, I felt pretty hurt and misunderstood at this point.

But I also didn't buy her concept of the 'head' vs the 'heart' business. After our conversation I thought about the things she had said alot. She rated her 'heart' approach to knowing God as a notch up from my 'head' approach. That was clear.
But the thing was, I knew that her diagnosis of my 'problem' was way off base.

After losing Olivia, I had, in fact become aware of a much deeper level of trust in God, and, probably for the first time, a really clear and tangible sense of His goodness and trustworthiness.
Infact I felt closer to God than I ever had before.
Anyway, weren't we to love God with all our heart, with all our soul, with all our mind and with all our strength?

But here's the thing that led me to this book:
One of the things I was asking her about was the practice of the early Christians, how they worshipped, what they did when they were no longer proper 'synagogue going' Jews.
I expressed the question thus:
" I mean...you know...what did they do when they got together for their "mass". What did they do then ?"

When I said "mass" I was just straining for the right word for "Christian get together". I could have said "Pow wow" or "fellowship meeting". I didn't actually mean Mass. I 'knew' they didn't have Mass back then. I mean...I wasn't stupid ( aside: Yes. I was.)

Here's what caught my attention though. Her response was SO emphatic. She was annoyed at my use of that word. She shot back with great forcefulness and stressed each word:

After speaking with her, on account of her emphatic, and even irritated response, my curiosity on this point was even more piqued.
I Googled this "Mass Early Christians"

It was a serendipitous Google.
The first result was a book of almost exactly that name.
Amused at my result, and intrigued by the title of the book, I ordered it from Amazon there and then.
Two days later it arrived. Two days after that I finished reading it.

In short, I learned that indeed there WAS a Mass in the early church.

Here's a snip from the Amazon blurb:

In The Mass of the Early Christians, author Mike Aquilina reveals the Church's most ancient Eucharistic beliefs and practices. Using the words of the early Christians themselves -- from many documents and inscriptions -- Aquilina traces the Mass s history from Jesus' lifetime through the fourth century. The Mass stood at the center of the Church's life, evident in the Scriptures as well as the earliest Christian sermons, letters, artwork, tombstones, and architecture. Even the pagans bore witness to the Mass in the records of their persecutions.

In these legacies from the early Church, you ll hear and taste and see the same worship Catholics know today: the altar, the priests, the chalice of wine, the bread, the Sign of the Cross...the Lord, have mercy ...the Holy, holy, holy ...and the Communion.

You ll see vividly how Jesus followed through on his promise to be with us always, until the end of time.

After reading it I knew that I could never see things the same way again.
The 'Mass experience' would never again be moribund and so so. And I knew that my questions had been finally answered.
I was going to be going home.
Posted by Clare@ BattlementsOfRubies at 00:23