(or his latter day counterpart.)
This atheist scientist says he "works" with fetuses and they "look human but they are not".

"I have worked with aborted fetus's during the course of my scientific studies, and I DON'T believe the things that I have dealt with in the lab situation which have come from abortions are human beings. They LOOK like them they resemble them physically, but they are not human beings."

Where have we heard that line of argument before?
Hitch the Younger nails every one of his fallacious "arguments" for murder and exposes the piffle that smart people will reduce themselves to in order to justify murder as a moral good.
Save The Whales!
Save The Trees!
Save The Seals!
Save The Planet!
(And if you change your mind and want to kill them after all, give them their latin name instead and pretend that they are something else)


(HT: Robert at Love Undefiled )
Posted by Clare@ BattlementsOfRubies at 00:46 No comments:


Since getting home I've been having a pig of a time trying to upload most of my  photos . Technical gizmos defeat me. So consequently I sulked and went on a blog strike.
Because that'll show technology to mess me around.

I think I've sulked long enough now however, so I'm going to give in and run with the few photos I've got.
We had such a great time in Ireland. The weather was untypical to say the least, and the sun shone every day. It didn't rain even once. I don't think I can remember a week in Ireland without at least some mizzle (mist/drizzle)

We got to spend time with some family.
My Aunt Kathleen came up from Cork with her husband and stayed for a couple of nights with us, and on Wednesday of Holy Week we had  some more family ( my uncle Val, his wife Joan, my cousin Peter and Uncle Seamus) over for lunch.
We attended the Easter Triduum services at the lovely little church in Glasson, where my Uncle Seamus is PP. 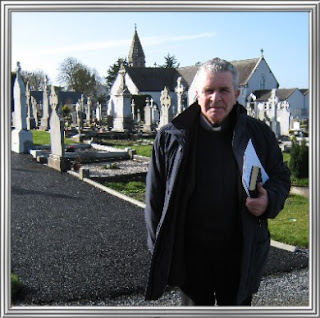 We adore him. He baptised Colmcille and Honor in this church.
Of three brothers who became priests, Seamus is the only one still living.
Fr Paddy and Fr Peter both died far too young. Peter only less than two years ago, and Fr Paddy died very suddenly 7 years ago.
My father has also lost two other brothers: John and Tony.
All these deaths came far too early to strong, wonderful men who should all have lived well into old age. The loss of each of them has dealt a terrible blow to my father and his remaining brothers and sisters.

I  miss Paddy terribly. He lived in England and I often used to talk with him in the evening when I had put the children to bed. His house in Dorchester was a lovely country retreat for us.
Death is so final.
When I was a child I remember Paddy coming to stay at our house and I wanted to follow him everywhere. He was huge fun and incredibly easy company. When he would retreat to his bedroom to read his Divine Office I followed him and climbed up on his knee and watched his lips mouthing the prayers.
I would pretend to do likewise and move my mouth and mutter under my breath as though I could read the words. I thought he'd be impressed.
If he noticed my pretence, he didn't let on.
When my Uncle Val gave me Paddy's very battered Breviary last week as a keepsake I felt very emotional and lonesome, for all those wonderful memories.And thankful too.


Anyway, mindful that my wonderful family are all on loan to me I want to make the most of dear Seamus while I have him. It's wonderful to have the opportunity to stay near enough that we can visit him quite often when we are in Ireland.

It's a lovely little church in a peaceful corner of the Irish countryside. The  graveyard is beautifully kept .
Fr Seamus says  that this is where he will be "planted". 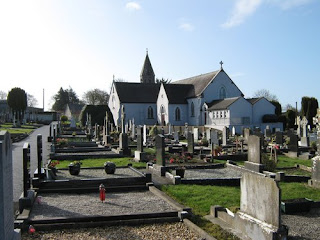 Although we managed to attend all of the other Triduum services, the parish Stations of the Cross were scheduled to start a bit late for us, so we decided to do our own with the children.
The church's garden has very beautiful Stations with brief readings carved on each one: 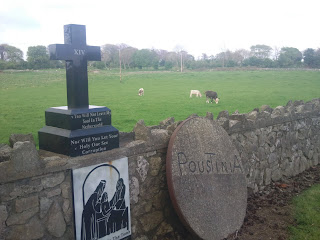 The fifteenth station, the resurrection, is set beside a huge ancient bog oak which a local farmer dug up in his field and gave to Seamus to erect here. He dragged it behind the tractor, sparking off the road like a flint.
It is as hard as a diamond .
I think, if my memory serves me right, he said it was at least 6000 years old. So it grew in Ireland 4000 years before the birth of Christ. That's old. 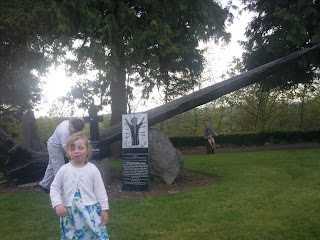 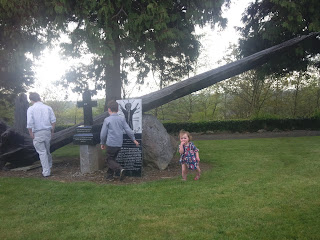 The bog oak points  to the crucifixion, the 11th station, which is both fitting, and slightly eerie.
How can anyone imagine 6000 years, let alone infinity? 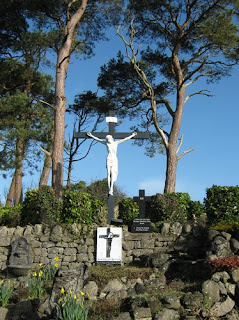 We adore you O Christ and we praise you, because by your holy cross you have redeemed the world.


( Edited to add:
PS Did anyone notice the very elementary maths error in my original post regarding the age of the bog oak? Perhaps it slipped under the radar of most speedy readers, I hope so.
Thank goodness for the edit function. Seriously!)
Posted by Clare@ BattlementsOfRubies at 00:53 6 comments: