I just nipped out for a pint of milk...

It's been rather a while.
Has it really been three months?
Incroyable!
I got distracted elsewhere.
I found a new online place to play and being  a shallow, fickle flibbertigibbit(sp?) with only so much time to spend online, I just wandered off and left my blog hanging in suspenders.
Humble apologies to anyone who's been wondering if all's well chez battlementsofrubies.


Here's what happened:
I was invited to join a new local neighbourhood forum. The sort where people mostly post about what's happening on Coronation Street, or The Archers, or ask questions about decent local restaurants and hairdressers.
Long story short ( and I'll get round to some of the long story later) I fell in. Like Alice down the rabbit hole.
Down, down, down.

And being the scrappy controversialist that I am, and delighting in the opportunity for a bit of swashbuckling , I got embroiled in all  sorts of discussions which were very far removed from the usual more pedestrian fare.
Like Alice, I've gone among mad people. It was quite absorbing.
And I've only recently emerged blinking into the sunlight. Where did the time go?

This local forum has a bit of history because it was started in response to a growing frustration with an already well established but very badly run other local forum.

So the new forum was born, and I was invited to join.

And then shortly after, someone posted a comment about how the Pope "thinks condoms are good now"
And then someone responded and said this:

"Most of what the Catholic church (as well as other churches) says has a political aim as well as a religious purpose. I don't follow the news about the Pope, tbh, so I can't comment on the reason of his move and its timing, but I'm reasonably sure it's not because the church has suddenly come round to the right way of thinking.
I used to have several practising catholics among my friends when I lived in Italy - they all used contraception, sometimes more than one method at the same time. "Religious but not stupid", in the words of one of them."

A red rag to my bull. I couldn't let that go.

It was like letting the hare out of the trap.
And that's where it all kicked off.
You can go and read the conversation that unfolded  here.

We covered a lot of stuff. At some point we were joined by a chap who works as a full time evangelist for the local Baptist church. He was very indignant by my defense of the churches teaching on contraception and wanted to know where all that was in the bible ( such grist to my popish mill!).
Later, when things had become quite convoluted, a newcomer asked for a precis of the discussion up to that point.
One of my interlocutors said this:

Charming.
I responded by graciously thanking him for the compliment regarding my wordsmithery.  I noted that the appellation "RC Supremacist", when spoken, becomes "arsey supremacist" which  isn't necessarily so wide of the mark as it happens.

It was feisty, and reasonably good natured, mostly.
Only a fellow swashbuckler could understand my interest in discussions like these. Some friends of mine are completely mystified by why I would want to engage in an exchange that they would find draining and even hurtful.
But I don't. As I said, I enjoy the parry and lunge. I find it energising.
And having to answer my critics means that I learn a lot too.
It's a good discipline to have to be very careful about the claims one makes when ones audience is hostile and ready to seize upon innacuracies or exagerrated claims as proof of my idiocy.

At times I fancied I was one of  those scrappy little karate kicking girls in Japanese films who end up taking on, and taking out , a roomful of men. As soon as one is dispatched, another pops up. 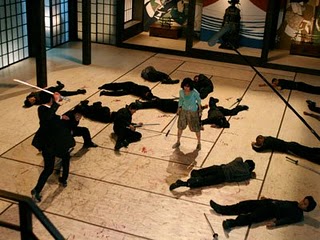 It was exhilarating at times, and frustrating at others.


One of my most challenging objectives was to make a point pithily without using too many words. That was hard. There is so much to say!

Mostly I struggle with brevity and want to cram too much into my response.

At one point I was told:


"Whether you like it or not if humans had (or do) follow the Catholic church's teaching on contraception there would be a total disaster. "

This was fairly typical of the general point of view.
And it did get a bit wearing constantly explaining why it was that, whether they liked it or not, if everyone followed the catholic churches teaching on sexuality, HIV would burn itself out within a single generation.


It should  be obvious that the Catholic church is not simply telling people to cast off their condoms and carry on regardless.
And it should be easy to see how  a catholic living a chaste life is at far less risk of catching HIV, than the sexual incontinent who puts his trust in the salvific power of the mighty condom.
But it isn't obvious at all to those who have been thoroughly inculcated with the slick marketing of the condom alongside the concept of "safe sex".
The condom is defended with a religious fervour.
Any criticism of the "safe sex" credo and the condomistas go spastic.
My interlocutors, who mostly saw the church as the enemy of poor Africans and women everywhere,  seemed to imagine that hordes of sexually incontinent risk takers will mysteriously become obedient to the churches teaching in one area only: that of condom use.

It was an interesting conversation. But if you don't have time to read it, watch this video instead for a short nutshell presentation of why the Pope was right about condoms not being the answer to the problem of AIDS:

Anyway, in the three months I've been away from here, it's because I've been busy over there.
We went from condoms to arguments for the existence of God, to discussions between the Baptist evangelist and I about Sola Scriptura and free will ( he doesn't believe we have it) to the authority of the church.
Inevitably we ended up with the hottest of hot potatoes: abortion.
I went out to meet the culture, as Fr Barron would say, with musket, fife and drum.


Anyway, that's what I've been up to online lately.
I'm sorry I've been gone so long .
It's nice to be back.
Posted by Clare@ BattlementsOfRubies at 00:02 5 comments: