In praise of online friends.


One of the novelties of blogging and other involvement with online 'communities' is the development of online friendships. This was a bit strange for me at first, and I didn't know quite how to categorise my affection for people that I'd never actually met face to face, and likely never would. I wondered if referring to "my online friends" made me sound like a bit of a saddo fantasist who played with make believe chums. Chums who, contrary to their online persona, were in fact old geezers at home in their vests on the computer, grooming me for "friendship etc" . Eww, perish the thought that Milehimama could actually be a schemer called Malcolm who doesn't get out much.

But the fact is it is possible to have online friendships which are every bit as authentic as any other. It occurs to me that the communion of saints operates a bit like this. After all, I have never met Saint Therese or indeed my great grand parents, but I still feel a sense of belonging to them, and of them belonging to me.

The very modern novelty of online friendships is interesting, but no less meaningful I think than any other long distance friendship, whether the distance is geographical or temporal. Last year I bought a blogging friend a gift from her Amazon wishlist. She was experiencing some financial hardship and while I couldn't turn up with a bottle of wine and a casserole, I was able to get her something she needed.
The internet has opened up new ways of relating to people and of supporting one another.
Just before Christmas I asked a favour from an internet buddy Sara, aka CatholicMom ( no prizes for guessing what foot she digs with) Sara gave me that prayer on my sidebar when I was expecting Marie-Aibhlinn and trying very hard not to let my anxiety get the better of me. I really wanted this diary/planner, but they don't ship overseas. I asked her if she might be willing to post it on to me, if I had them ship it to her first.
So, she agreed. And with marvellous American super efficiency, she fedexed it to me. And that's not all. She included a matching set of pink pyjamas complete with tutus for Honor and Marie-Aibhlinn! Oh the pinkness!
It was SO thrilling to take delivery of the fedex parcel.Honor tossed my prized planner aside ( it is wonderful, and I think the most practically useful planner I've ever had) as she dug into the box and pulled out the pink. Little girls just know that that pink is for them.
Then she snuck off to her room and got undressed again. I peeped through the jamb of the door to see her struggling with the tutu. So I stealthily scooted off to get my mobile phone to capture it, and by the time I came back she had moved on to pulling on Colmcilles pirate socks. An interesting combo, very Camden Lock circa 1980's. A pair of Dr Marten boots and the look is complete. Here she is when she spots me with my camera. 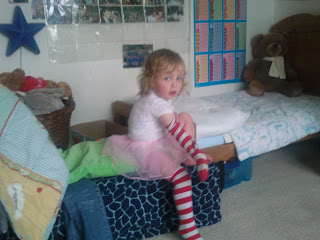 Pleased with what she had put together, she struck a pose: 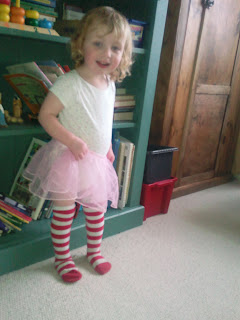 Then she asked me to take a photo of her nativity set: 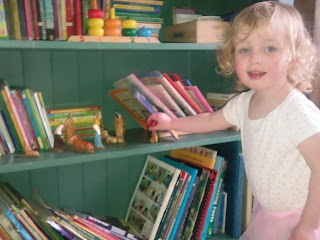 ( I say 'asked' but really she did a lot of pointing and "interrogative grunting". She's not very verbal yet)

I'm including this next picture because I love "back to the camera" photos, they are so unselfconscious. Here, she's fossicking around for a book: 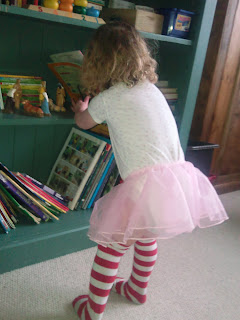 And Colmcille, not being as entranced by tutuness as we are, can't understand what all the fuss is about. 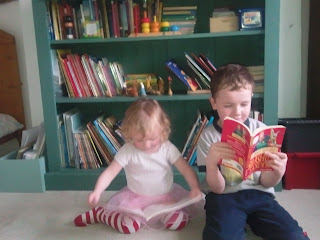 After these, we put Marie-Aibhlinns tutu on her, it's just as well she can't stand up yet since it is still much too big, but we took pictures of Honor holding her. Two little puffballs of pink tulle. Frustratingly, they were taken on my husbands camera which has since disappeared before i got a chance to upload them. I held off posting this hoping that the camera would turn up and I could complete the photo gallery, but dear saint catholicmom must be wondering if she's ever going to see the promised pictures, so I've given up waiting for the camera to turn up ( we're thinking that it might be permanently lost *sigh*)
Anyway, it's high time I put these pics up.
So thank you CatholicMom! I really appreciate your helping me out, and for sending such a delightful gift for the babies. And whether it's Florida or London, I hope we DO actually get to meet in person eventually!
Posted by Clare@ BattlementsOfRubies at 00:52 5 comments:

I'm a bit busy at the moment, owing in part to the fact that we have 4 birthdays in January ( well technically 3 birthdays that are actually IN January, but I'm counting Gabriel because his big day is the 5th feb which is as near as dammit January as far as I'm concerned)
I take full advantage of the January sales naturally.
We don't have particularly extravagant birthdays here but we do have birthday traditions that must be honored. "Tradition!" as Tevye famously insisted on, without which life would be "as shaky as a Fiddler on the roof".
Our hallowed birthday tradition always includes the following:
Anyway, smoothly seguing from the discussion of tradition. I have mentioned before how my fascination with/affection for all things Jewish was really significant in my return to the Catholic church.
I am delighted to have found this blog which is right up my philosemite alley.
And it's podcastastic. Here's a list of some of his talks:

I love listening to podcasts. If I could think of one good reason to take up jogging it would be so that I could get a bit of peace and quiet and listen to a podcast. Sadly that isn't going to happen because I find jogging ridiculous. At least it is when I'm jogging. If you saw me jog you'd agree with me. I'm one of those people who can't run. My legs go in the wrong directions and I get traumatic school flashbacks of being cruelly mocked. I think yard for yard I'm actually slower when I jog than when I walk.
Digressing again.
Anyway, I am determined to get these talks by the admirable Mr Marshall onto my uncool, hand me down, first generation ipod and listen to all of them.
He's also written a book called The Crucified Rabbi which I am resisting at the moment. Podcasts are more time efficient at the moment and besides I've got a teetering pile of half read books beside my bed which reproach me every evening. I don't need to add any more just yet.
I like this video for the book though and I love the music ( something warbly and Jewish and then Bittersweet Symphony by The Verve)

Posted by Clare@ BattlementsOfRubies at 01:15 6 comments: 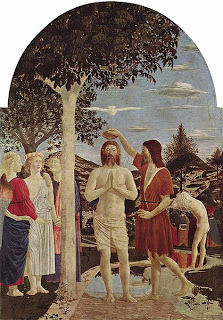 On Sunday 10th January, the church kept the feast of the baptism of Our Lord.


Here in London our own little Marie-Aibhlinn Teresa Benedicta was carried to the waters of baptism and emerged a new soul.
Deo Gratias!
It was exciting and moving and very splendidly done. We are very grateful to our incredibly hardworking and faithful priest Fr Alan, who is constantly labouring in the service of the people of God.

Happily a couple of our guests ( thank you husbands of Elizabeth and Paola!) had the presence of mind to film the rather dramatic dunking.
She seemed more bothered about being undressed than being fully submerged three times. When she came out I thought she would be in a lather of tears and would need a little calming down feed, but she was quiet and quite quickly fell asleep.

Our priest was clearly so deftly confident that I felt rather as though I was handing her over to the doctor. I wasn't anxious, although I was praying that there wouldn't be any nappy accidents. Fr Alan said that it's never happened. Maybe those babies just know that if there is one time in their life not to have a potty emergency, this is it!


And here's another that happens to be the right way up

And then when she was dried off, she was dressed in the gown her daddy wore. 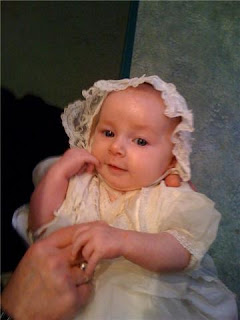 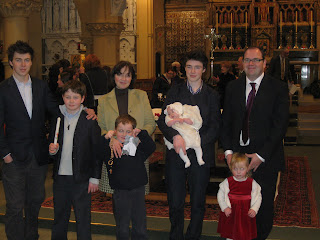 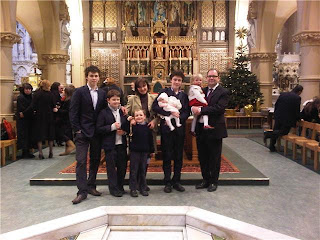 And so are we!
Posted by Clare@ BattlementsOfRubies at 02:06 14 comments: 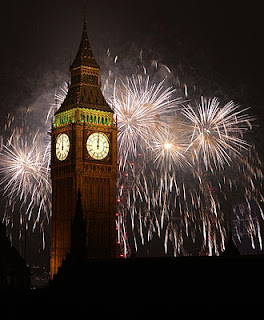 It's over.
The fat lady sang two and a half hours ago here in wintry London.
I'm not an enthusiastic greeter of the new year.
" Well children" I announced as I packed the little cherubs off to bed "We're another year closer to armageddon. Sleep tight".
I'm very glad that we hardly ever write cheques anymore because it always took me about six months to get used to the new year. Mind you not all that long ago I actually wrote 1994 down on a letter and it took me a while staring at it to work out what was wrong.
Happy new year ma peeps!
Posted by Clare@ BattlementsOfRubies at 02:16 3 comments: