While my father was reading to the girls last week, I sneakily nipped into the utility room, fired up the mobile phone and took a video. I'm not usually very good at being on the spot with  technology to capture the moment when it presents itself. But I'm glad I managed to catch this for posterity.

I love hearing my father read stories, and it's adorable to see the girls enjoying it too. Funnily enough, I don't 'hear' his accent when I'm speaking to him, but I notice it on a recording. Don't know why that is.

( Memo to self: Pipe down when recording, ones voice is awfully loud and annoying)

Posted by Clare@ BattlementsOfRubies at 00:07 6 comments:

Labels: Honor, Marie-Aibhlinn, Memory box, Stuff we've been up to

The urchins are loving the snow.
Dominic and Colmcille went out for a fight and Colmcille came off worst. In fact I don't think he managed to land even one on the far too fleet of foot Dominic.
It wasn't a fair fight really.

I meant to take a photo when I opened the door to them but the phone was on video mode.

Boys. You have to love them. 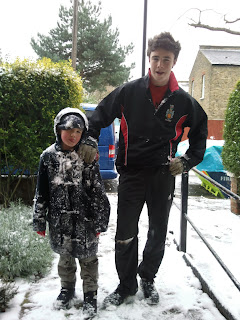 And for Gabriel ( because I know he'll enjoy this, and he's under the weather with flu at the moment)  here's a video of the Irish Dominicans having a snowfight :

(HT: Fr Tim)
Posted by Clare@ BattlementsOfRubies at 23:39 No comments:

Labels: Colmcille, Dominic, Memory box, Stuff we've been up to

From your 24/7 rolling news service...This just in

Snow news.
A woman dialled emergency services today after  thieves made off with her snowman.
She had given him pound coins for eyes and teaspoons for arms ( hmmm, teaspoons?) and the brigands made off with those too.

Listen here to the audio of her frantic call for help.
"There's been a theft from outside my house." She said.
"I haven't been out to check on him for five hours but I went outside for a fag and he's gone."
When she was asked who had gone, the woman replied: "My snowman. I thought that with it being icy and there not being anybody about, he'd be safe."
She was then asked whether it was an ornament, and answered: "No, a snowman made of snow, I made him myself.

It ain't a nice road but at the end of the day, you don't expect someone to nick your snowman, you know what I mean?"
The police did not really know what madam meant and were not amused. 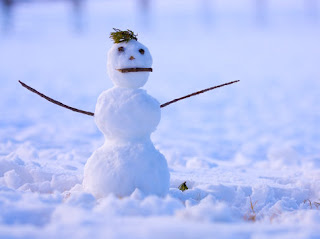 "I went outside for a fag and he's gone"

Posted by Clare@ BattlementsOfRubies at 23:20 2 comments: