40 Days For Life. A timely and powerful testimony. Yesterday morning I recieved this months CD of the month from Lighthouse Media.
It is the incredible testimony of Dr Bernard Nathanson, the abortionist turned passionate pro life activist who died earlier this year, May the Lord have mercy on him.
He gives an eloquent and dignified account of his  life, his Jewishness, the hardship and poverty endured by his grandparents and his father, his fathers subsequent rejection of God and how this informed the young Bernards own worldview.
He explains  how he came to spearhead the abortion rights movement in the US which ushered in the legalising of abortion, and his succesful business running the largest abortion facility in the world.
He estimates that he was directly responsible for 75,000 abortions  and the wrecked lives of many others.
He was the man who, in his own words "uncaged the abortion monster" in the US, and by extension, much of the world beyond.
And he would spend the rest of his life attempting the apparently Sisyphean task of  getting it back in it's cage.
Small wonder that he was quoted as saying "I have such a heavy moral baggage to drag into the next world"
It is simply devastating to consider how it must feel to wake up to the magnitude of the crime against humanity in which you yourself have been a key player.

At one point in the talk he describes how, after he himself had already repudiated abortion, he asked a doctor friend who was a practising abortionist to film a D&E (dilatation and evacuation) termination in progress. This friend, when he saw on the ultrasound monitor, the reality of kicking  limbs being torn asunder and understood for the first time what he had being doing, he was distraught. He never carried out another abortion again.

He speaks beautifully about the significance of personhood. Because the human being in the womb IS a person, and to deny personhood to another human being is to tread in the footsteps of history's most reviled and wicked tyrants. This really made me aware of the importance of the language we use, and I made a mental note to myself to be sure to use the word "person" more often when referring to the unborn baby.

He rejected abortion as an atheist, on humanitarian and scientific grounds. And he remained a pro life atheist for some time.
It was only later, after a crushing depression, that he started to reconsider faith with fresh eyes.
Looking to the Jewish faith of his fathers for some hope for redemption and forgiveness, he found little.

Eventually, through the aquaintance of an Opus Dei priest, Fr John McCloskey,  who understood that Dr Nathanson was a man best reached first in the intellect, he came to accept the peace of Christ.

It was a deeply moving account. And I felt that throughout it, I could hear in his voice the sobriety, gravity and firmness of purpose of a man set on spending the rest of his life making reparation.
I have rarely listened to a talk that so haunted me, and even though there are lots of noisy distractions here, I have found my thoughts drifting back to it all afternoon and evening since.

It was very well timed on the part of the Lighthouse team to send this CD out while 40 Days is underway. And listening to Dr Nathansons story has reminded me not only of the horror of abortion itself, but of the devastating effect on so many people who have been touched by abortion, the consciences dulled, the emotions wounded, the hearts hardened or broken.
It has renewed my zeal to teach my children to protect and defend human life always, and why it is necessary to never "pass by on the other side of the road", but to put ourselves at the service of  the least of our brothers. 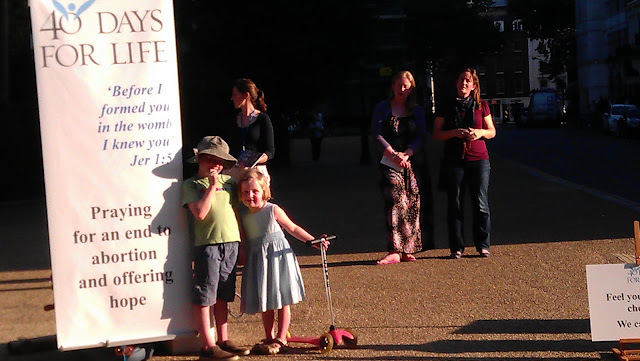 Posted by Clare@ BattlementsOfRubies at 20:52